Zhongli is a mix of support and damage dealer. He uses polearm so his attacks are quite fast, and also has a unique charge attack that's useful for positioning. His elemental skill places a stone slab to deal damage, and has synergy with other Geo structures. Holding the skill will detonate the Geo structures to deal some damage while also gaining a shield based on his max hp. His elemental burst deals damage and petrifies enemies, immobilizing them for a short period of time.

From the early looks, Zhongli is best with his normal attacks and physical damage increase IF you want to build him as your main DPS. This is because his elemental skill has low damage for tap, and long cooldown for hold. The elemental burst may not be super reliable since you need to keep charging it as well as wait for the cooldown.

There are 2 options if you want to build him for normal atk damage. 2 piece Bloodstained Chivalry with 2 piece Gladiators Finale, or 4 piece Retracing Bolide. Go with the one that you have good main stat and substats on the artifact. You mainly want Phys DMG increase on the cup, and crit rate on the crown, crit dmg up if you use a crit rate up weapon.

The weapon of choice is Crescent Pike if you are free to play. It helps boost damage by a noticeable amount, and can be refined for further increase if you happen to get the drop material from weekly bosses. Otherwise, any 5 star polearm is a good option, Primordial Jade Winged-Spear being the better one, or the weapon that will be coming with Zhongli's banner.

For support, there's 4 piece Archaic Petra. It mostly works if you get the shield from "Crystalize" reaction, a pretty conditional restriction, but can boost the damage by a noticeable amount when done right. Otherwise, you can't go wrong with just 4 piece Noblesse Oblige, or some 2 piece energy recharge sets like Scholar or The Exile to spam his elemental burst often. Focus on HP main stat and substats to increase the strength of his shield, and energy recharge substats for faster elemental burst charge.

For weapon, since you won't really be using him to deal damage, go with weapons that give energy recharge like the craftable Prototype Grudge.

If you are building him for damage, then you're going to want to put him in a party with at least another Geo user to help with energy gain. Zhongli might have a synergy with the Geo main character if his elemental skill works with the Geo construct. There's also Ningguang that can really generate a lot of energy if you have her at constellation level 2. For the other 2 in your party, you can consider someone like Xingqiu for extra durability as well as high damage elemental burst support, and / or double Pyro characters for the resonance using characters like Bennett for easy atk increase.

When Is Zhongli Available?

In Genshin Patch 1.1 Chinese Livestream, it's officially confirmed that Zhongli is going to be available with ver1.1 that's coming on November 11.

Performs up to 6 consecutive spear strikes.

Consumes a certain amount of Stamina to lunge forward, causing stone spears to fall along his path.

Plunges from mid-air to strike the ground below, damaging enemies along the path and dealing AoE DMG upon impact."

Every mountain, rock and inch of land is filled with the power of Geo, but those who can wield such powers freely are few and far between.

Commands the omnipresent power of earth to solidify into a Stone Stele, dealing AoE Geo DMG.

Additionally, the Stone Stele will resonate with other Geo Constructs in the vicinity, dealing Geo DMG to surrounding enemies.

The Stone Stele is considered a Geo Construct, and can both be climbed and used to block attacks. Only one may exist at any one time.

Causes nearby Geo energy to explode, causing the following effects:

Brings a falling meteor down to earth, dealing massive Geo DMG to opponents caught in its AoE and applying the Petrification status to them.

1: When shield takes damage. Shield effect gets stronger by 5%. Can stack 5x

Honey Impact Genshin DB site has published Zhongli's skills and constellations. Go the website and check them there! 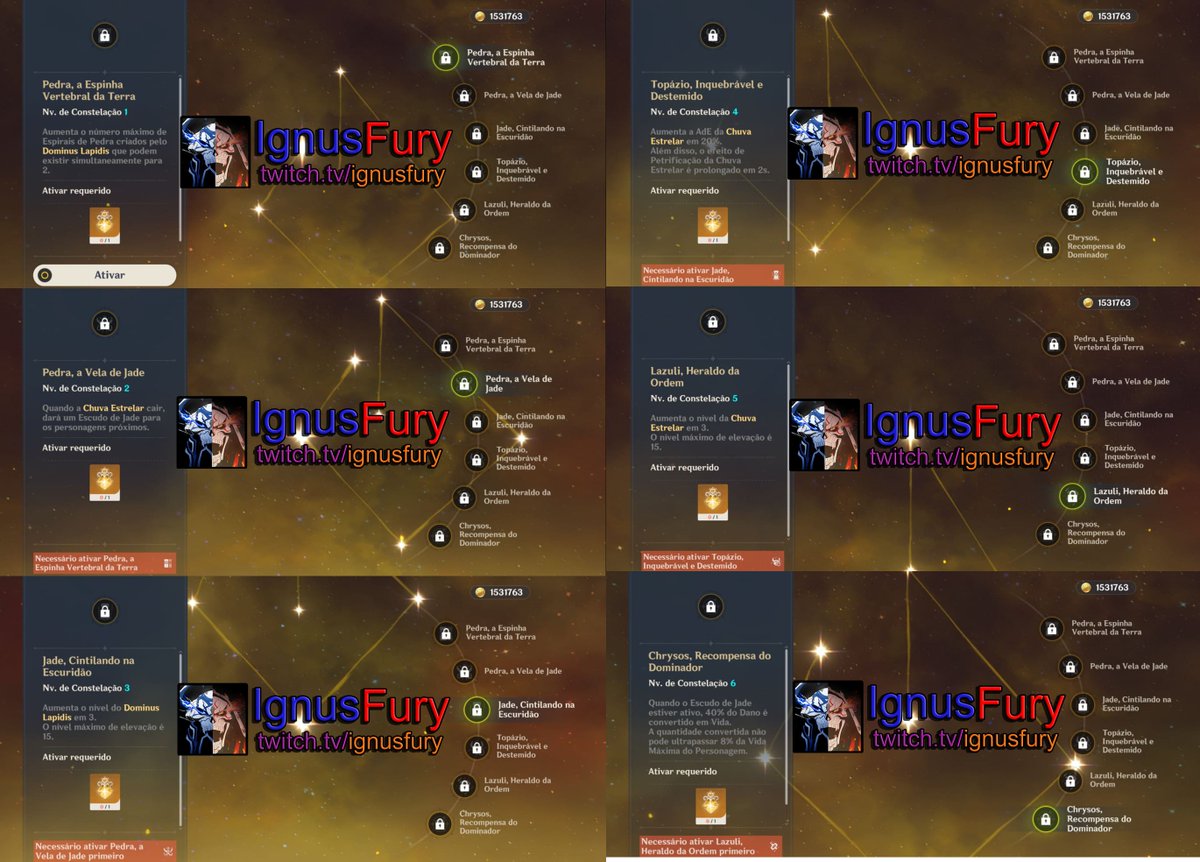 How to Get Rare Equipment

Ganyu 6
with those skills..........she should be a 4 starts right?
Genshin Leaked News 6
Childe's a pretty chill guy compared to the other fatui.
Albedo 10
yes, sword user 100% confirmed
Glaze Lily 1
I had been collecting this things for days, it turned out that they respawn every 2 days
> Go to the latest comments