When you start your adventure, you will eventually come across towers like this, like when your main character got the Anemo power during tutorial/prologue section. You can use these towers to increase your statue's blessing level by giving them Anemoculus.

Anemoculus are spread out all over the map, and it looks like the picture above. You can find them on the minimap with a white star icon when you are somewhat close to one. You'll want to pick all of these up since they are very important for increasing your stamina.

Each blessing level requires varying amounts of Anemoculus, and each level will increase your stamina by 8, as well as giving some much needed Adventure exp. There will be times when you won't be able to progress with the story since you need a higher Adventure Rank (AR), so you might as well explore the map and find some Anemoculus and get additional benefits.

Kaeya is a free character that you will get once you progress far enough in the story. Every character has a passive that is always available, and sometimes benefits the entire party. This would be a good time to also look at your characters' talents and abilities.

But why bring specifically Kaeya? This is because his passive talent reduces sprinting consumption stamina by 20%. Genshin Impact is very big on exploration, and so you'll be sprinting A LOT. On top of the fact that you can also eat foods that can further reduce stamina consumption, it makes this passive quite helpful. In case you have been spending a lot on the game, or have been getting many characters and you're wondering if it's even worth putting him into your main party? Make sure that you first check your characters' passive talents, since stamina reduction passive is not exclusive to Kaeya, but he is a good option to bring since he's a free character.

You can eat foods to help reduce stamina consumption, which is very useful since there's going to be a lot of running, climbing, and traveling in general.

You can get a recipe for Barbatos Ratatouille early on in the game, by talking to the nun that's near the edge of a cliff at Stormbearer Point. The enemy's level is around 19, but you can easily avoid enemies if you are under leveled.

There's also a food that will recover your stamina right away. You can get this recipe from a treasure chest near the Statue of Seven - Anemo in the Stormterror's Lair.

To help you keep track of things in your travels, you can put down up to 99 markers on the map. Simply tap anywhere on the map to place one down. The icon can be changed, and you can even give it a custom name. 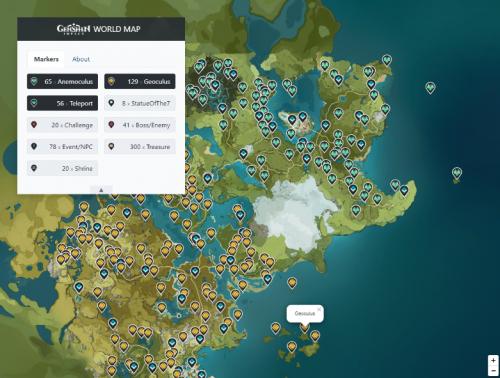 There's also a useful website that you can use to view the locations of the collectibles in the game. Use your map pins to help remind you which ones you have already taken so you don't need to backtrack.

Pretty self explanatory. There is an inventory limit in the game, but it's so big that even if you are a massive hoarder that won't get rid of anything you have, it will still take a long time to reach max cap. Every item has a use since there's cooking, crafting, ascension, etc, so you will want to pick up everything that you can since you might end up needing it later.

You can view your original resin amount at the top right of the screen when you open the map. This is essentially the "stamina" system of the game. It can be used in a lot of things covered here, but the important thing to keep in mind is that you should not leave it unused at 120/120 since it recharges quite slowly.

Level up weapons and artifacts

Levelling your characters will increase your stats, but they are NOT as considerable as levelling up your gears! But gear stats are usually percentage based on your base characters' stats, so you'll still want to level them up of course. More gear information will be explained here.

If you are climbing, or falling from a very high place, you will take damage when you reach the ground because of fall damage, and this CAN kill your character. But! You can somewhat negate the damage that you take, simply by doing an attack in the air. This will make your character slam to the ground for an attack, and for some reason preventing you from taking damage you would have otherwise taken if you didn't do an attack. It's important to keep in mind, that it doesn't completely prevent you from taking damage, just severely reduces it.

There will be times when you might be feeling lazy to walk the long road and just want to climb instead, and when you do, it's best to do the slow climb instead of jumping for the extra boost. It takes longer to do this, but it's important one to remember when you're trying to reach large heights. You can also eat a stamina recovering food when you're climbing, swimming, or gliding to prevent exhaustion.

Whenever you're feeling lost and don't know what to do, or what you can do, check the Adventurer Handbook by tapping on the journal icon on the top right, or from the main menu, or F1 if you're playing on PC. The handbook shows a lot of things, like missions to do, dailies(commissions), bosses, or domains. The experience tab is the one you want to start doing since it provides plenty of rewards when you complete them.

Is "this" character good?

Possibly one of the most COMMON questions asked, for a good reason of course. While having a certain character can be quite impactful, the game mostly focuses on the exploration, and most of it is done in single player. There's also no Player vs Player feature in the game, so you don't really need to think about whether or not your character is good compared to others. Every character has their own uses, but if you want to min max in general, you can check out our tier list.