Scaramouche is known as 6th of the Eleven Fatui Harbingers. According to the leaks, his vision is Electro and weapon is catalyst. 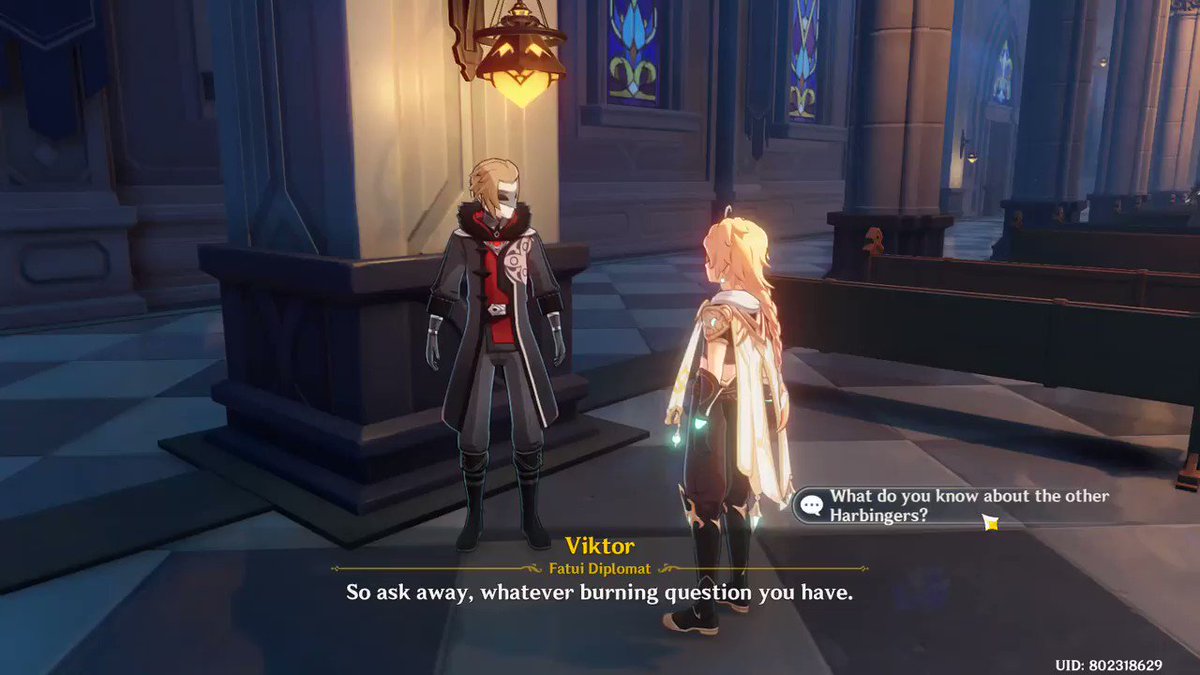 The Harbingers? They're way above my level. I'm lucky if I hear the odd rumor.

For what it's worth, I can pass on what others have told me. But I advise you to take it with a pinch of salt.

I hear Harbinger No.6, also known as Scaramouche, is difficult toget along with. A lot of people are not fans of his.

Why? Some say he just has a disagreeable personality. Other say it's because he doesn't know when to keep his mouth shut...

I know someone who works closely with the guy. He says Scaramouche is even disliked by several of his fellow Harbingers.

But I mean, like him or not, he's still a Harbinger. He'd doing an awful lot better than a rank-and-file Fatuss like me...

Anonymous
Is his vision and weapon 100% confirmed or is this more of a guesstimate.
Reply
<< Anonymous

Anonymous Reply
vision is confirmed from the fischl event in the beginning of the game, weapon isn't confirmed yet.
<< Anonymous

Xiuying Reply
Don’t be disappointed, he will make history. He is the first male electro catalyst user and he will probably be strong since he is the 6th fatui harbinger.
<< Anonymous(lmfao)

Anonymous Reply
Yesss! I want him to be Catalyst too. Hopefully main dps but I'd still be okay with support. I think Catalyst suits him way more than most male characters would!
<< Anonymous(Xiuying)

Anonymous Reply
keqing is more disappointed in you

Anonymous
With his huge hat, it'd make sense for him to be a catalyst.
claymores, polearms, swords, and bows all have animations that use a very wide span of movement from the character since they have to hold it. a claymore or polearm realistically would get caught in the screen of his hat way too easily and with how the animations of other teen male users are having such a wide span of movement animation (Albedo, Bennett, Xingqiu, Kazuha and how they all swing behind them and over their head at some point) it just wouldn't make sense unless he quite literally cuts up the screen of his hat or knocks it off his head.
for a bow, the weapon itself is bigger than you think it is, and to hold it up properly to do a charged shot, the bow would most definitely clip into Scara's hat.
The weapon that moves the least is a catalyst. Note that the character can move as much as they'd like but they can control the catalyst to stay in relatively the same spot and Ningguang doesn't even show her weapon at all unless she uses her skill, burst or plunges but after will tp to behind her and disappear after a while). This gives Scara free space to do whatever he likes without his weapon colliding into anything and Mihoyo is very careful with animating everything so nothing clips together without glitching of some sort.
Those are my two cents on the possible weapon explainations
Reply

Anonymous Reply
In an interview it was said it appeared his banner would be running during endgame inazuma ;-; we’re gonna be waiting a while

Pedrelino
The page says he's a catalyst with an electro vision, but everthing that was leaked by him was his models we don't know nothing about his vision nor his weapon
Reply

Scaramouche
Why does Scaramouche has to be the catalyst user?! I love him as a sword user more! Please
Reply
<< Anonymous(Scaramouche)

BomBom Bakudan Reply
Because most of inazuma's characters recently are sword users, ayaka, kazuha, now baal as well, they're taking this samurai concept a bit too literally

Anonymous
Electro? I'm pulling for the Archon version instead, so far having playable god is nice, it's changed everything
Reply
<< Anonymous

BomBom Bakudan Reply
Latest news abt baal is tht she'll be once again a support archon tho :3

Anonymous
Is it he from inazuma?
Reply
<< Anonymous

Anonymous Reply
He is from Snezhnaya, but we are most likely going to meet him at Inazuma for the second time
<< Anonymous

Sekaramoose Reply
Yes.. but recruited to the fatui so.. Inazuma origin but as Snezhnaya militer

just a razor main
I am saving for him.
Reply

Anonymous
Does anyone know if he is a 4 or 5 star?
Reply
<< Anonymous

Anonymous Reply
I do not have official info, but I am sure he (and all other fatui) will be 5 stars
<< Anonymous